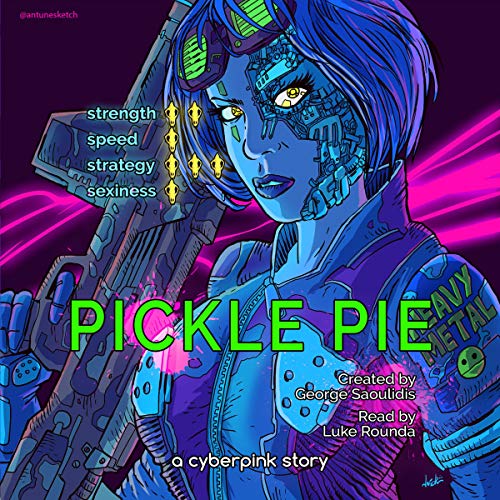 In an all-too-plausible near future Athens, popularity is queen. Debt slavery is not only legal, it’s been gamified. It even has an official bloodsport: Jugger.

Jugger’s playerbase of ruined and exploited female athletes paint the town pink with blood—‘shopped for streaming to all ages.

Inside and outside the Arena, perverts, crony capitalists, and cyborg deathknights run the streets.

But with the help of a gutsy cyberpink girl and a savvy Veil hacker, the bankrupt smithy who crafts the elite their armor suits is about to rewrite the playbook…

Some projects have had longer running times, but with Pickle Pie, you’re getting a diverse, full cast of voice acted characters, ranging from sports announcers to “God” to sexy cyberpink girls to essentially “Bones” McCoy doing triage in the field with a robot pack mule (imagine it: “Dammit, I’m just an old country doctor, not a corporate hospital!”).

As well as the voices, there’s also an assortment of sound effects licensed under Creative Commons (see below for attribution) and also original foley work. It’s even more like listening to a movie now!

For fellow audio gear nerds, this production also marks my first time moving up from the Blue Yeti and using new and fancy recording hardware: a Shure SM7B microphone and a dbx 286 channel strip. So that’s pretty exciting. I’m super proud of the results, and though I still have lots to learn, I think the quality bump is audible, no pun initially intended.

George’s Cyberpink series keeps the same infectious energy from Nanodaemons–slightly wacky in the vein of Pixar movies, mixed with an undercurrent of Black Mirror tinged dystopian dread–but for anyone who didn’t care for the digitized daemon voices from that book, the characters are literally more human this time around. Except when called for, like with a big scary cyborg terminator, the voices rely much less on digital manipulation than in Nanodaemons.

Cyberpink’s dystopia sits in the Goldilocks Zone of what I might call Just Dystopian Enough to be fun and cool to visit. Certain trends in rapidly globalizing societal decay which have been extrapolated into the future within the book’s pages seem frighteningly and nauseatingly plausible to me here in 2019. At the same time, our heroes maintain humanity and spirit in the face of it all, without descending into cartoonishness. Thus, in my eyes, the story is neither a bleak slog through depression, nor a no stakes superhero paint-by-numbers.

I hope you’ll enjoy visiting the world of Pickle Pie as much as I did. I’ve already signed on to narrate the other books in the series, so keep your internet dials tuned for that.

This Vernacular Audio audiobook production uses many sounds from Freesound.org, courtesy of their respective authors. A full list follows below. This attribution list can also be viewed at MythographyStudios.com/freesound.